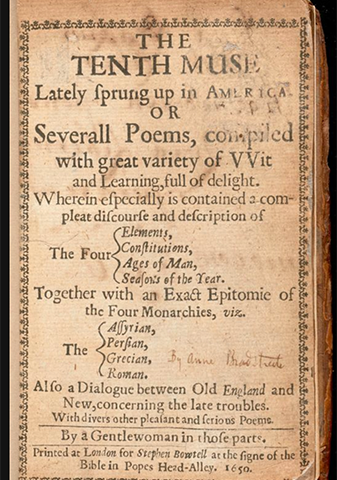 Update: I’ve discovered an error in my line. So, I’m not actually related to Anne Dudley Bradstreet. However, the story itself is still fascinating. And, I wouldn’t be surprised if I find another line connected to her.

I enjoy combining genealogy with book and library history. For the past several months, I’ve been exploring the life of my 9th great-grandmother, Anne Dudley Bradstreet (1612-1672)… better known as Mrs. Anne Bradstreet, New England’s first published poet. Anne was the mother of eight children and wife of the Governor of the Massachusetts Bay Colony.

Anne’s Poetry
Anne’s collection of poetry was titled The Tenth Muse Lately Sprung Up in America. It was first published in London in 1650 and received a positive reception in both the Old and New World. The book is available through Digital Commonwealth: Massachusetts Collections Online.

Although she was a Puritan, Anne was also a free thinker, feminist, and naturalist. Her poems explored her love of family and nature as well as providing a bit of commentary on science, history and society at that time. Her poems are intimate and many are not intended for public consumption.

The Author To Her Book
Some say that she hadn’t planned for her works to the published. Her sister and brother-in-law took the poems to English in 1647 and published them without her permission. However, there’s some evidence that she knew of the publication and she pretended not to know because it was “inappropriate” for a woman to be publishing poetry. For instance, she wrote a self-deprecating poem titled The Author to Her Book as a letter that was published in the works.

… obnoxious to each carping tongue
Who says my hand a needle better fits,
A Poets pen all scorn I should thus wrong,
For such despot they cast on Female wits:
If what I do prove well, it won’t advance,
They’l say it’s stole, or else it was by chance.

Later Editions
For later editions, Bradstreet was able to edit the collection and include additional poetry. Unfortunately, she died in 1672 before this edition was published.

After Anne’s death, the second edition of her book was printed with additional poems and edits/corrections of her original poems. This first American printed edition was published in Boston by John Foster in 1678. Titled Several Poems, it’s credited to “a gentlewoman in New-England. Read the text.

In 1758, the third edition was published. It’s available through Internet Archive.

In 1867, The Works of Anne Bradstreet In Prose and Verse was edited by John Harvard Ellis. This edition is excellent, however it’s also strange because it includes images of the men in her life. But there’s no image of Anne. She had smallpox as a child and chose to not have an image made of herself. It’s assumed that she may have had scarring on her face. Any image you see is not based on the real person. It includes all of her known works.  It’s available through Internet Archive.

Here stood that Trunk, and there that chest;
There lay that store I counted best:
My pleasant things in ashes lye,
And them behold no more shall I.
Under they roof no guest shall sit,
Nor at thy Table eat a bitt.
No pleasant tale shall ‘ere be told,
No things recounted done of old.
No Candle ‘ere shall shine in Thee,
Nor bridegrooms voice ere heard shall bee.
In silence ever shalt thou lye;
Adieu, Adieu; All’s vanity.

Anne Bradstreet’s home burned on July 10, 1666. Her poetry reflects the loss of treasured possessions and evokes memories that will never be relived.

Copyright
As one of thousands of descendants, I don’t need to worry about royalties, because Colonial American didn’t have copyright right laws. The first copyright law wasn’t enacted until May 31, 1790 in the United States. Today, her poetry is in the public domain and is found in many anthologies.

Marginalia
The Digital Commonwealth website from Massachusetts includes a first edition that lists all the owners of the book to establish provenance. The entry page contains a hand-written note by the original owner Jana Eakins. Along with the name, it provides a latin statement that begins, “I assume that his book will be free to lose…”

Connection
For family members, the lineage is through Annette’s dad’s side of the family and the female line.

Since 1998, Annette Lamb and Larry Johnson have shared their passion for teaching and learning through the eduscapes website. Although they have both retired, they continue to share their experiences and passion for lifelong learning. Annette's emerita status at Indiana University at Indianapolis allows her to continue involvement with educators and librarians.